Deadpool Congratulates Wonder Woman’s Box Office As Only Deadpool Can

It’s easy to think of Marvel and DC as warring factions in the battle for the hearts and minds of geeks everywhere, but that’s generally not the case, especially when it comes to the movies. Case in point, Ryan Reynolds took to twitter to push through an official Deadpool congrats to Wonder Woman for her impressive box office numbers. The film has now passed $368.5 million domestically, booting Deadpool’s $363.1M off the top ten list of highest grossing super hero movies of all time. 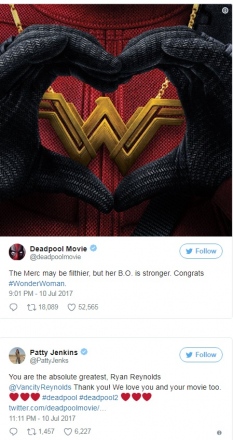