Not really a spoiler because all you have to do is look at a blown-up version of a poster, but whatever. If you are super sensitive about spoilers, be warned.

A couple of days ago, we posted a banner for The Amazing Spider-Man 2, which featured 3 different villains: Electro, Rhino, and The Goblin. While we know that Jamie Foxx is Electro and Paul Giamatti is Rhino, there was some question as to who would be the Goblin. It could either be Chris Cooper, who is playing Norman Osborne, or Dane DeHaan, who is playing his son, Harry. Well, thanks to the power of zoom, we now have the answer. If you look at this blow up of the banner, you can clearly see that Dehaan is the Goblin. Thankfully, he doesn’t have the goofy mask from the Sam Raimi films, but I have a feeling that a lot of fans are still going to scoff at this maskless version as well. 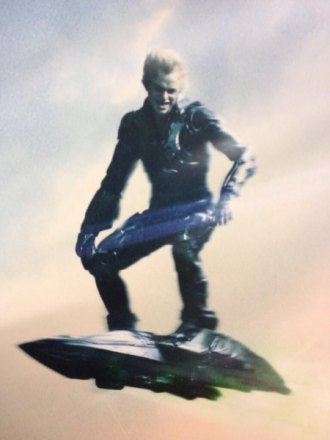 In The Amazing Spider-Man 2, for Peter Parker (Andrew Garfield), life is busy – between taking out the bad guys as Spider-Man and spending time with the person he loves, Gwen (Emma Stone), high school graduation can’t come quickly enough. Peter hasn’t forgotten about the promise he made to Gwen’s father to protect her by staying away – but that’s a promise he just can’t keep. Things will change for Peter when a new villain, Electro (Jamie Foxx), emerges, an old friend, Harry Osborn (Dane DeHaan), returns, and Peter uncovers new clues about his past.