Thanks to ESPN The Magazine’s website, we’re able to show you all the images from the epic Marvel x NBA mashup. 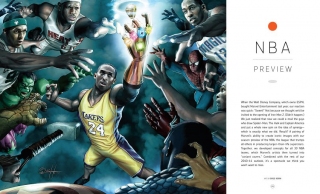 Last week we showed you a teaser of the upcoming Marvel x ESPN cover where NBA players were re-imaged as Marvel superheroes. Today, thanks to ESPN The Magazine’s website, we’re able to show you all the images from the epic Marvel x NBA mashup.

According to Vice President and Executive Editor Alex Alonso:

“I was immediately excited and to me the mathematics of NBA superstars and Marvel super heroes just goes without saying… This was a collaborative effort from the ground up. The editors [at ESPN The Magazine], myself and [Marvel Manager Talent Relations] George Beliard, who was assisting me, were in constant communication at every stage in the game down to the minutiae of the shoelaces.”

Meanwhile, ESPN The Magazine Editor-In-Chief Gary Belsky had this to say:

“They didn’t presume to be experts on the NBA, so we figured out pretty quickly that what we needed to do was give them storylines for each team and they’d match up the appropriate stars or owners with the right Marvel characters or storylines…. That’s where they were expert, and I’ve got to tell you they did an amazing job in terms of figuring out the best connections between the NBA storylines as defined by ESPN The Magazine and the pantheon of Marvel characters.”

If you like these images, be sure to pick up your copy of ESPN The Magazine which will hit newsstands next month.