I was worried that we’d never get a chance to see The Dark Knight Returns Part 2, but WB just announced that they’ll be premiering the first bit of footage from the film at NYCC.

When they announced that they would be shutting down the home entertainment branch of WB that makes the DC animated features, I was worried that we’d never get a chance to see The Dark Knight Returns Part 2, but WB just announced that they’ll be premiering the first bit of footage from the film at NYCC.

They were also kind enough to release the first image here: 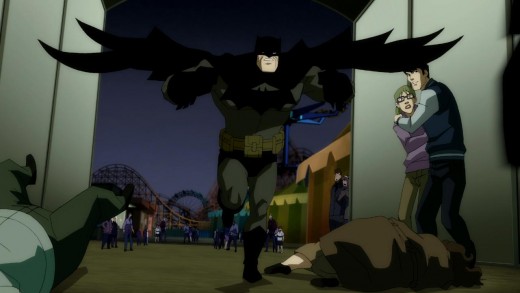 Batman: The Dark Knight Returns, Part 2 and The Batmobile documentary will be the spotlight offerings from Warner Bros. Home Entertainment at New York Comic Con.

Attendees of the Con will be the first to see footage from Batman: The Dark Knight Returns, Part 2, the highly anticipated epic animated conclusion to Frank Miller’s landmark story. On Saturday, October 13 from 12:15-1:15 p.m. in the IGN Theater at the Jacob Javitz Center, executive producer Bruce Timm, dialogue/casting director Andrea Romano and special guests will discuss the making of the next DC Universe Animated Original Movie and show some tantalizing clips. Also anticipated during the panel is the announcement of the 2013 slate of DCU animated films. Produced by Warner Premiere, DC Entertainment and Warner Bros. Animation, Batman: The Dark Knight Returns, Part 2 will arrive from Warner Bros. Home Entertainment in early 2013.

An autograph session with Timm & Romano will follow the panel at 2:00 p.m. in the DC Entertainment booth.

No vehicle has ever captured fans’ imagination like the Batmobile – and New York Comic Con attendees will be the first to see the entire one-hour documentary, The Batmobile, at a special premiere screening on Friday, October 12 from 1:30-2:30 p.m. in the IGN Theater.

The film gives a riveting, in-depth examination of the Batmobile – from the impressive history of all of the vehicles to the construction of this iconic character. The documentary features a distinguished array of Batman experts and filmmakers including Adam West; George Barris, designer of the famed 1966 Batmobile; respected producer/author Michael Uslan (The Boy Who Loved Batman); Andy Smith, builder of the modern-day Dark Knight Tumblers; Tim Burton, Director of Batman (1989) & Batman Returns; Joel Schumacher, Director of Batman Forever and Batman & Robin; Christian Bale; and Christopher Nolan, Director of The Dark Knight Trilogy. The Batmobile documentary is directed by Roko Belic and produced by Tara Tremaine for Warner Bros. Home Entertainment.