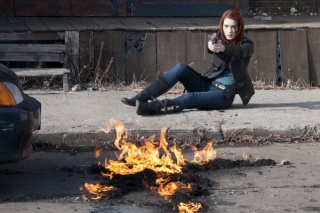 As you can see, Day will play Red, a werewolf hunter and a blood line descendant of Little Red Riding Hood. The plot will revolve around Red’s fiance, being bitten by a werewolf and she has to make the hard decision of either hunting him down or saving his life.

Scheduled to premiere in 2011, Red is Syfy’s latest re-imagining of classic fairy tales, legends and pop culture characters. The new line of films launched with Beauty and the Beasts: A Dark Tale, which starred Estella Warren, on February 27.

Syfy, one of television’s most prolific producers of original movies, is also developing films around the stories of Aladdin, Sinbad the Sailor and Hansel & Gretel, among other projects.

In the action-packed Red, Red (Day) brings her fiancé home, where he meets the family and learns about their business – hunting werewolves. He’s skeptical until bitten by a werewolf. When her family insists he must be killed, Red tries saving him. Red also stars Kavan Smith (Stargate Atlantis) and Stephen McHattie (Watchmen). Red is produced by Angela Mancuso and Vesuvius Productions in association with Chesler Perlmutter Productions.

In addition to Buffy the Vampire Slayer, Felicia is most widely known for her work in web video. She co-starred in Joss Whedon’s Internet musical Dr. Horrible’s Sing-a-long Blog, which was voted the Best Web TV of 2008 by Time Magazine, Entertainment Weekly and People Magazine.

Currently she stars in the web series The Guild, which she created, writes and stars in. The Guild was the winner of the YouTube, Yahoo and SXSW Best Web Series Awards for 2008. The series has generated more than 50 million views web-wide. Day also has a hugely popular Twitter following, reaching more than 1.7 million fans.

Syfy is a media destination for imagination-based entertainment. With year round acclaimed original series, events, blockbuster movies, classic science fiction and fantasy programming, a dynamic Web site (www.Syfy.com), and a portfolio of adjacent business (Syfy Ventures), Syfy is a passport to limitless possibilities. Originally launched in 1992 as SCI FI Channel, and currently in more than 96 million homes, Syfy is a network of NBC Universal, one of the world’s leading media and entertainment companies. (Syfy. Imagine greater.)