… and he’s all out of bubblegum.

Fans have been waiting for years to see Bruce Campbell slip on the chainsaw and start wasting deadites. Now, the time is finally here and Entertainment Weekly has the first image of Campbell as Ash in the new series, Ash vs Evil Dead.

I just watched Army of Darkness again a couple of weeks ago, I showed it to my mother and stepfather, both of whom are in their late 60’s. They loved it. I still love it, I actually don’t really know anyone who doesn’t love it. This is so exciting! I’m hoping that by the time Comic Con is over, we’ll have our first look at the show. 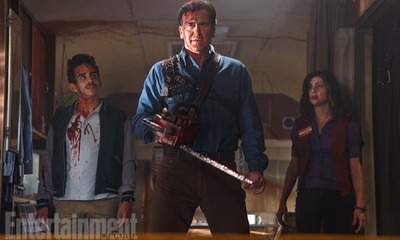 Here’s what Campbell had to say when asked what Ash has been up to all these years:
“Not much!” says Campbell. “He was perfectly happy doing basically nothing: telling lies about how he lost his hand in bars late at night. That was basically his MO. So, he’s not really the guy who should be dealing with this right now. But…he is. He’s our guy!”