While the special is aimed at kids, adults should enjoy references to Psycho, Aliens, and Predator.

Some other sites are reporting this as a new Toy Story short. That doesn’t really cover what we are getting here. This is a full, half hour special that will be airing later this year on ABC. At least that seems to be closer to what the network is reporting.

Here’s what we know so far, via TV Guide:

– The short will be 30-minutes long, and has the toys staying in a motel after Bonnie takes them on a road trip only to have the car break down along the way. Once inside the spooky motel, one of the toys goes missing, and “the rest of the gang will find themselves caught up in a mysterious sequence of events that must be solved before they all suffer the same fate.”

– While the special is aimed at kids, adults should enjoy references to Psycho, Aliens, and Predator

– Joining the regular gang of toys will be Mr. Pricklepants (Timothy Dalton) and Trixie (Kristen Schaal).

– “The show focus more on Jesse (Joan Cusack), but we’re also going to see the new dynamic between Bonnie, her new toys (i.e. Andy’s old toys), and her previous toys.”

– The show is set to air in October. 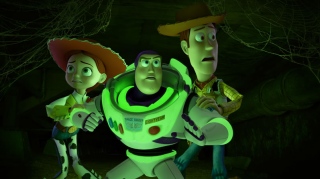