That’s funny… I don’t remember any mimes in ‘Dark Shadows’.

It feels like we’ve been talking about the movie adaptation of the classic vampire soap opera ‘Dark Shadows’ for a long time. With a cast that includes Johnny Depp, Chloe Moretz, Michelle Pfeiffer, Helena Bonham Carter and Jonny Lee Miller, expectations are high. However, now that we are seeing the first images of Johnny Depp as Barnabus Collins, it might be time to reassess those expectations. 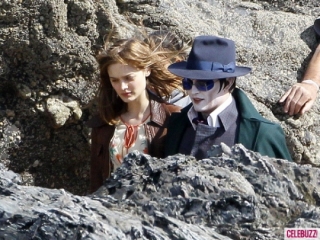 General consensus on the net… and at Wookie central is that this does not look good at all. Is Tim Burton making a good movie or is he channeling Ed Wood? I really try to reserve judgment until I see something more concrete, but damn… he looks like a mime.

Here’s the official synopsis
In the year 1752, Joshua and Naomi Collins, with young son Barnabas, set sail from Liverpool, England to start a new life in America. But even an ocean was not enough to escape the mysterious curse that has plagued their family. Two decades pass and Barnabas (Johnny Depp) has the world at his feet—or at least the town of Collinsport, Maine. The master of Collinwood Manor, Barnabas is rich, powerful and an inveterate playboy…until he makes the grave mistake of breaking the heart of Angelique Bouchard (Eva Green). A witch, in every sense of the word, Angelique dooms him to a fate worse than death: turning him into a vampire, and then burying him alive.