A major spoiler for the after credit scene in “Iron Man 2” has been leaked recently on to YouTube and immediately removed. But the details have been coming out of the woodworks…

A major spoiler for the after credit scene in “Iron Man 2” has been leaked recently on to YouTube and immediately removed. But the details have been coming out of the woodworks and on the awesome-tease scale it’s similar to the first after credit scene which revealed Nick Fury.

io9 breaks down the scene as followed:

We see a desert landscape, with sandy dunes punctuated by the occasional bit of scrub. There are mountains off in the distance. A black car zooms across the screen, dust and exhaust in its wake. The car swerves and roars towards the camera, and we see its New Mexico license plate: 8RE 2Z1. A man steps out of the car, and then we see him standing on top of a tall hill with a single tree, looking down at something.

The man is revealed to be SHIELD agent Coulson, wearing dark glasses and a dark suit.

He’s looking down at a smoking crater, which is being circled by a bunch of cars, as feverish activity takes place around it. He turns away from the crater, and touches his earpiece. “Sir,” he says, “We’ve found it.” The camera pans back to show what’s in the crater – Thor’s hammer, looking much like it does in the comics.

The scene obviously teases at the upcoming “Thor” adaptation and if the image below of the hammer doesn’t get you excited, than the universe has just revoked your geek credibility entirely. Yes, I know, there isn’t much to this low-res grainy picture, and we all saw The Destroyer the other day, but it’s the Mjöllnir! 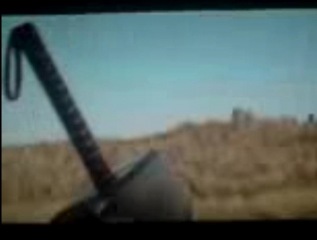