This time it’s Kong: Skull Island, and it stars Tom Hiddleston and Brie Larson as a British Special Forces vet and a war photographer, who stumble across the giant ape.

The last time we saw King Kong on film, it was the work of Peter Jackson. The movie and the beast, as beautiful as they were, left a lot of people wanting more from a story perspective. Just a few years later, we are back where we began, with a new King Kong movie from Warner Bros. This time it’s Kong: Skull Island, and it stars Tom Hiddleston and Brie Larson as a British Special Forces vet and a war photographer, who stumble across the giant ape.

Today, we got our first look at the newest take on the iconic ape, via EW. 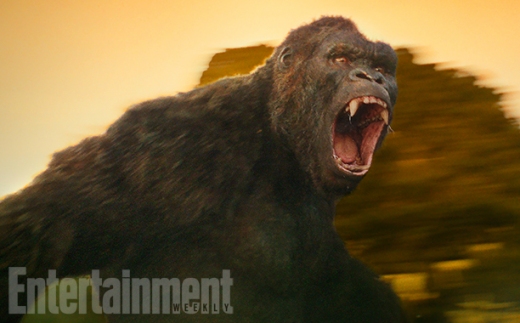 The film’s director, Jordan Vogt-Roberts had this to say about the studio’s design specs for how they wanted King Kong to look:

“I had a mandate that I wanted a kid to be able to doodle him on the back of a piece of homework and for his shapes to be simple and hopefully iconic enough that, like, a third grader could draw that shape and you would know what it is. A big part of our Kong was I wanted to make something that gave the impression that he was a lonely God, he was a morose figure, lumbering around this island.

We sort of went back to the 1933 version in the sense that he’s a bipedal creature that walks in an upright position, as opposed to the anthropomorphic, anatomically correct silverback gorilla that walks on all fours. Our Kong was intended to say, like, this isn’t just a big gorilla or a big monkey. This is something that is its own species. It has its own set of rules, so we can do what we want and we really wanted to pay homage to what came before…and yet do something completely different.”