Although not official press images, a set of screen from WB and Rocksteady Studios’ much anticipated “Batman: Arkham City” have been leaked on Flickr that reveals Catwoman, Harley Quinn and Two-Face.

It’s hard to believe that these are forgeries but we’ll just throw that out there just in case they do turn out to be fake… really good fakes.

Take a look at the gallery below, and let us know what you think? Pretty damn incredible eh? Already pre-ordered! 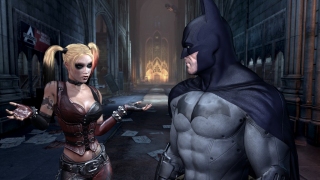