Originally announced in June and based on the classic 1985 time traveling cult hit, we now have our first look at how this much anticipated new game might look. 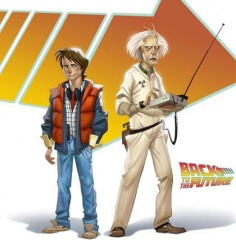 When it rain it pours. We’re nearing the 25th anniversary of “Back to the Future,” and if a UK theatrical re-release, new Blu-rays and a week-long celebration that’s expected to go on in Los Angeles weren’t enough, we’re also getting a brand new video game by Telltale Games.

Originally announced in June and based on the classic 1985 time traveling cult hit, we now have our first look at how this much anticipated new game might look. According to Telltale Games, the game is expected to include the likeness of Michael J. Fox and Christopher Lloyd, who portrayed the characters Marty McFly and Doc Brown in the films. Lloyd is also expected to reprise his role as Doc Brown and provide the voice in the game.

Bob Gale, who wrote the original screenplays for the three films has been working with the game developers on the plot for the planned five “episodes.”

Storyline wise, Telltale confirms that the games will take place in the fictional California setting of Hill Valley. It will be set in 1985 and characters from the movies will make appearances in the game.

Telltale’s recent releases include a series of Sam & Max games available for download on Xbox Live, the PlayStation Network and for computers at www.telltalegames.com.