Wow… So if Prometheus sucks it will not only piss off fans of the Alien series, but also Guillermo Del Toro fans… No pressure there.

Wow… So if Prometheus sucks it will not only piss off fans of the Alien series, but also Guillermo Del Toro fans… No pressure there. Here is essentially what is going on. Guillermo Del Toro has been trying to make his H.P. Lovecraft film, At the Mountains Of Madness, for quite some time now. He even got Tom Cruise lined up to star and James Cameron committed to produce and advise on 3D. The first major problem that they hit was making an R rated horror film for $150 Million dollars. Because of that, Universal passed on the project,but Del Toro was still shopping it around elsewhere.

Enter Prometheus. According to Del Toro, it is very similar to what he had planned for At the Mountains Of Madness and, because of that, the film is pretty much dead in the water. Here’s what he had to say:

Same premise. Scenes that would be almost identical. Both movies seem to share identical set pieces and the exact same BIG REVELATION (twist) at the end. I won’t spoil it.

I have been interviewed about this lately and wanted to post my two cents about this:

Prometheus started filming a while ago- right at the time we were in pre-production on PACIFIC RIM. The title itself gave me pause- knowing that ALIEN was heavily influenced by Lovecraft and his novella.

This time, decades later with the budget and place Ridley Scott occupied, I assumed the greek metaphor alluded at the creation aspects of the HPL book. I believe I am right and if so, as a fan, I am delighted to see a new RS science fiction film, but this will probably mark a long pause -if not the demise- of ATMOM.

The sad part is- I have been pursuing ATMOM for over a decade now- and, well, after Hellboy II two projects I dearly loved were not brought to fruition for me.

The good part is: One project did… And I am loving it and grateful for the blessings I have received.

On the upside, he did have this little bit of info to give on how they will be creating the giant mecha robots for his upcoming “Pacific Rim”:

No motion capture. All Key Frame. The cadence and gait of something 250 feet tall cannot be exactly human EVEN if its human operated.

There are Iconic moments in the film but we are trying to focus on CREATING moments rather than making an homage. 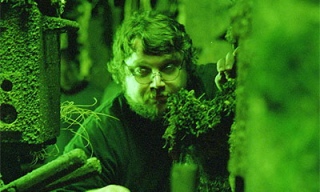