Wondercon 10: ‘The Sorcerer’s Apprentice’ With Nicolas Cage And Jay Baruchel

Based loosely on the classic animated short from “Fantasia,” of the same name and stars Nicolas Cage and Jay Brauchel. 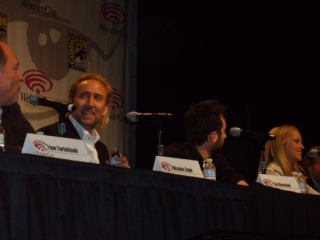 One of the largest draw this year at Wondercon 2010 was Disney’s unveil of Jerry Bruckheimer’s “The Sorcerer’s Apprentice,” directed by Jon Turteltaub (National Treasure).

The movie is loosely based on the classic Mickey Mouse animated short from “Fantasia,” of the same name. It stars Nicolas Cage (National Treasure, Ghost Rider), Jay Baruchel (She’s Out of My League), and Alfred Molina (Sider-Man 2). The movie, loosely based on the animated segment from Fantasia of the same name, and Cage plays sorcerer Balthazar Stone, who’s been hunting for someone called the Prime Merlinean. While Baruchel plays Dave, his bumbling but ultimately destined sorcerer’s apprentice.

Two extended clips were shown at the panel Saturday with the first introducing Dave (Jake Cherry) as a 10-year-old child meeting Balthazar for the first time. The clip opens with Dave chasing a note which magically slips into a mail slot to a strange antique magic shop, which is Balthazar’s Arcana Cabana. Dave walks inside and is rather clumsy, knocking over priceless artifacts. Balthazar greets him and tells him that he has a gift for him. At first Dave declines and tries to leave, but Balthazar magically closes the door to the shop. Hesitant Dave stays, but is worried.

Balthazar opens the box and inside there was a small metallic dragon statue. Once Dave touches it, it magically comes to life and bonds with his finger forming a ring. Balthazar leaves Dave for a minute reminding him to not move or touch anything. Of course, Dave touches stuff and and bad things happen. A Russian porcelain doll is knocked down and it cracks upon impact unleashing hordes of cockroaches which forms the shape of a man and eventually morphs into Max Horvath (Molina). He asks Dave what time it is, wanting to know the year. Before anything else could continue, he’s zapped into the ceiling by Balthazar who returns.

Horvath’s power emits from his cane which he is able to reach for as Balthazar lectures Dave. He frees himself and throws Balthazar into a wall. The two then begins a magical duo with Horvath using his powers to wield a sword. Balthazar then summons his inner Hadoken and blasts Horvath , while Horvath creates fire and sets the entire shop on fire. Dave crawls to safety but is spotted by Horvath. But before Horvath could do anything, Balthazar leaps at him through the wall of fire. They struggle for control and both men are pulled into a sand-filled urn and which will entrap them for ten-years. Before then two sorcerers are taken, Balthazar tells Dave that “In ten years, I’ll find you!” to which Horvath adds, “So will I!”

The second scene takes place ten years later and as Baruchel comments “Will I actually be in this now?” as he wasn’t in the first clip. The clip begins with Dave as a teenage in a bathroom stall at NYU. He’s confronted by another apprentice named Drake Stone (Toby Kebbell) who tells him that he knows he’s an apprentice and reveals that he is one too by magically turning on the hand warmers in the bathroom. He asks him to attack him with his best spell. Pitifully, Dave does and it does absolutely no damage. They talk and eventually he pins Dave to the wall while Dave whines about how this feel like being bullied in high school all over again.

Horvath then enters and greets Dave, telling him that he is going to kill him while dismissing Drake. Dave pretends to not know who he is or what he’s talking about, but Horvath tells him how bad of a liar he is (a running joke apparently).

“That’s what I keep telling him,” Balthazar says off camera, suspending Drake in midair. He then asks Horvath if he wants his guy back and hurls him across the room with frightening authorioty. The two master sorcerers then engage in a struggle trying to shove one another into some mirror portal that Balthazer had created. Scene ends with Horvath being blasted into the stalls.

“The Sorcerer’s Apprentice” opens on July 16.