Wondercon 2010: Chuck At Wondercon, And Special Message To Fans

Lucky fans who attended Wondercon this year in San Francisco got a chance to see tonight’s new “Chuck” episode in its entirety. 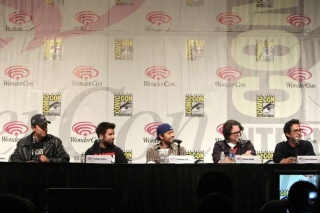 Lucky fans who attended Wondercon this year in San Francisco got a chance to see tonight’s new “Chuck” episode, “Chuck Versus The Other Guy,” in its entirety. And while we’re trying to keep this spoiler free we will say that it’s a can’t miss episode as the status quo dramatically changes! You’re just going to have to wait a few more hours when it airs Monday night. Seriously, you can’t miss it!

Stars of the show Zachary Levi (Chuck Bartowski), Adam Baldwin (John Casey) and Joshua Gomez (Morgan Grimes) joined the “Chuck” panel Sunday, along with co-creators/executive producers Josh Schwartz and Chris Fedak. All were on hand to meet and greet the fans and to field questions.

According to the creators, “Chuck Versus the Other Guy” was originally intended to be the season’s finale, but then they were picked up for six more episodes. Rather than trying to pad things out, they decided to just go for it and give fans what they want and ultimately they believe it worked out for the best.

Other interesting and worthwhile things to note include the return of Scott Bakula who plays Chuck’s dad. He is officially confirmed as a returning guest, along with Julia Ling as Anna (Although Gomez said his character won’t be having any love interests anytime soon, hmm). Also expect to see more of Christopher Lloyd to return, who Levi and Gomez idolize as the “Doc.” Also while this is sort of spoilerish, fans can expect to see more of Casey’s daughter. Although Baldwin denies knowing anything, co-creator Fedak hints that someone as important as her will definitely return with a proper follow-up. Baldwin then nonchalantly adds that it’s already been shot to tease the audience even more.

While “Chuck” intendeds to have a strong season plot wise, there’s still no official word that it may be renewed for next the next season. With that said, Levi, in a very serious tone, addressed the issue by saying that advertising dollars essentially dictate what show stays and what show gets the boot. Meaning that no matter how much fans try to “Save Chuck,” it’ll do very little good if advertisers aren’t kept happy. If fans want “Chuck” to stay on air, they must watch it live on television when it airs and not online via Hulu or from DVRs. Of course leave it up to Levi to not be able to keep his composure and then break out into jokes about how instead of “Saving Chuck,” fans should find a way to hack the Nielsen boxes that log television ratings. “Save Chuck! Hack Nielsen!” I’m game!

Additionally, behind closed doors, an emotional and sincere Baldwin wanted to officially go off the record by saying that he and the entire cast are all extremely appreciative of all the dedicated and passionate support they’ve had from fans. He doesn’t think fans really know how much they all care and he is especially grateful to have such wonderful fans and is touched by their fierce loyalty. Yup, tough guy Baldwin is getting soft on us!

“Chuck Versus The Other Guy” airs Monday April 5 only on NBC. Catch it live!