Production for the manga adaptation “Priest” has been churning we get our first look at two of the movie’s main characters, Paul Bettany and Cam Gigandet.

Like a bat out of hell, production for the manga adaptation “Priest” has been churning and today we get our first look at two of the movie’s main characters, Paul Bettany and “Twilight” actor Cam Gigandet.

From JFX Online, Bettany and Gigandet are seen in costume in a slew of set photographs (Bettany is looking a bit suspiciously like a Sith from Star Wars). Not much is known about the actual script or plot but these pictures do clue us in as to the direction of the film and its progression.

Bettany of course, stars as the warrior priest with a mission to end “vampires.” Meanwhile, Gigandet will play a small town sheriff whose girlfriend has been abducted by a gang of vampires led by the villain Black Hat, played by Karl Urban.

With the recent news that “True Blood” star Stephen Moyer would also be joining the cast, “Priest” is gearing up to be one fantastic adaptation even if it’s rumored to be nothing like the manga. 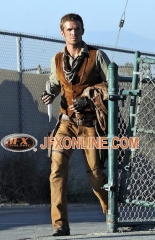