First Look At The Destroyer From Marvel’s Upcoming ‘Thor’ Epic

Your first look at the villain, The Destroyer, from Kenneth Branagh’s upcoming “Thor” epic.

Latino Review has published this image of what they are claiming to be The Destroyer in Kenneth Branagh’s upcoming “Thor” film.

Sent by one of their spies not called The Black Widow, here’s your first look at the new villain sent to earth by Loki to destroy Thor.

From their report:
The Destroyer is an enchanted suit of armor forged by Odin, and when it first appeared it was hinted that the Destroyer had been created as a weapon to face some dark menace from the stars. The Destroyer is used by Thor’s arch-foe Loki on several occasions, and each time has actually come close to killing Thor. 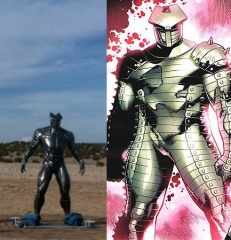 “Thor” is scheduled to hit theaters on May 20, 2011 and will be distributed by Paramount. It will stars Chris Hemsworth, Tom Hiddleston, Natalie Portman, Anthony Hopkins, Jaimie Alexander, Colm Feore, Samuel L. Jackson and Stellan Skarsgard.