First Look At The Girls From Zack Snyder’s ‘Sucker Punch’

“Sucker Punch” is like “Alice in Wonderland,” but sci-fi with dragons, zombies, mechas and pure awesome.

Although I can’t comment much on the film itself, what I can say is that it’ll feature nothing but badass and beautiful women who’d can and will kick your butt up and down the street. “Sucker Punch” stars Emily Browning, Abbie Cornish, Vanessa Hudgens, Carla Gugino, Jena Malone, and Jamie Chung.

“Sucker Punch” tells the story of Babydoll (Emily Browning) who’s sent to an insane asylum by her abusive step father. There, she imagines an alternative reality full of awesome. Think Alice in Wonderland, but sci-fi with dragons, zombies and mechas.

If you’re attending San Diego Comic-Con this year, Snyder will be hosting a “Sucker Punch”panel on Saturday. Which means there will definitely be a teaser, clips and beautiful women.

Sadly “Sucker Punch” won’t drop until next year, March 25. In the meantime, check out this new image. 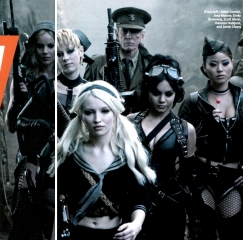