W magazine has released the first official image of Rooney Mara as Lisbeth Salander in the David Fincher directed US remake of “The Girl with the Dragon Tattoo.” 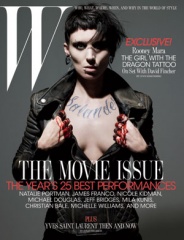 W magazine has released the first official image of Rooney Mara as Lisbeth Salander in the David Fincher directed US remake of “The Girl with the Dragon Tattoo.” The film is based on Stieg Larsson’s crime thriller trilogy, The Millennium Series. If you’ve never heard of this Swedish series by now, chances are you’ve been living under a rock.

I have to say, the transformation Mara has undergone is amazing and ultra sexy. Below is a brief description from W about her transformation into a 31337 hax0r:

The transformation began with the hair. Mara’s long brown mane was dyed black and cut in a series of jagged points that looked as if she had chopped it herself with a dull razor. The bangs were cropped very short and uneven, and the rest of the hair was layered into an extended shag. The final result was a mash-up of brazen Seventies punk and spooky Eighties goth with a dash of S&M temptress. That look, which could also describe Salander’s nature, was echoed in her wardrobe—a collection of ripped stockings, low garter belts, skintight leather, and heavy-soled boots. In all the angry, attractive darkness, Mara, who is 25, lithe, and petite, radiated an intriguing mix of menace and vulnerability. Fincher’s Lisbeth Salander, as channeled by Mara, is unique—a brilliant but childlike avenging angel with an understanding and an appreciation of violence.

Fans can expect the US remake to be released in theaters on December 21st, 2011. 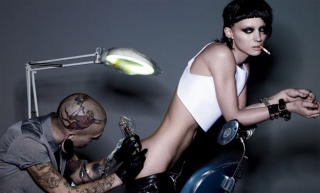