Kristen Stewart might have Charlize Theron as her evil queen in Snow White and the Huntsman, but Lilly Collins will be going up against an evil Julia Roberts.

Last week we saw the first pics of Kristen Stewart in Snow White and the Huntsman. Now we are getting our first look at Julia Roberts as the Evil Queen in a competing Snow White movie movie. Theron will be playing a darker queen while Robert’s movie will be more family oriented. Along with Julia in the film are: Jordan Prentice, Joey Gnoffo , Sabastian Saraceno, Collins, Martin Klebba, Mark Provinelli, Ronald Lee Clark and Danny Woodburn. 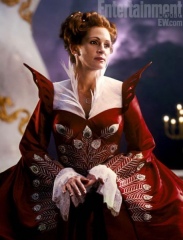 Here’s what director Tarsem Singh had to say about the evil queen.
“She’s the cat that ate the canary. From serial killers to anyone who does evil deeds, they basically have a devil-made-me-do-it excuse, or they hear voices, I decided for the evil queen, this is going to be a person who sees her [good] self — but there’s a mirror personality. She outsources her evil, just like most people. I wanted a person who is just schizophrenic. She’s just a person who would just do all the evil she needs to do to stay in power.”