Check out the first image of Jason Patric in ‘Powers’ and see what show producer Charles Eglee has to say about using the comic book storylines in the TV show.

One of the more interesting super hero projects on the slate right now is the FX network adaptation of the Brian Michael Bendis created ‘Powers’. The show, which stars Jason Patric as Christan walker, a former super hero who now works as a detective that investigates heroes when they step out of line, and Charles S Dutton.

The show is filming the pilot in Chicago and the Chicago Sun Times got to attend a press conference with producer Charles Eglee and FX president John Landgraf on set.

One of the big revelations from the producer is that the show will be taking the storyline off book.

“For me it was about creating some interesting characters in a law enforcement context, and it just so happens that the bad guys they’re fighting have abilities that regular people don’t have. I just look at our bad guys as metaphors for real-life characters.”

Buzz on the pilot has been pretty strong so far, but it is not complete and FX has not officially picked up the show as of yet. Some people think that it is inevitable… but many people thought the same thing about ABC’s Wonder Woman. 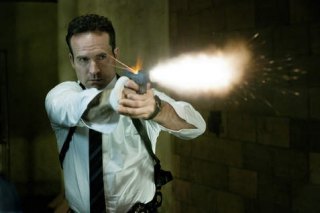