Check after the jump for the first photo of the samurai sword wielding bad ass that is about to turn The Walking Dead up a notch.

The other day we had our first look behind the scenes of the new season of AMC’s The Walking Dead. Now, Entertainment Weekly has just released the very first official image of this season’s most anticipated new character, Michonne.

Here’s what show creator, Robert Kirkman has to say about how she’ll be presented o TV compared to the Comics.
“The essence of the character — her personality, her motives, everything that makes Michonne — remains intact from the comics. But like a lot of things on the show, there will be little tweaks and differences here and there. We saw that her introduction is slightly different from how it was in the comic, and her interaction with Andrea is really going to be a really cool addition to the character that I think will get television viewers up to speed, and they’ll get to know her a lot faster than comic book readers did.”

Kirkman also talked about how they landed on Danai Gurira for the part of Michonne:

“We looked at a lot of talented people that were really fantastic, but we were waiting for that one spark, that moment where everyone was completely in agreement and completely excited, and we felt like we had found the essence of this fictional character that just randomly appeared in another person, and that person was Danai Gurira. She kind of came in and really just blew us all away. She’s got incredible presence, and she’s got a theater background, and is very physical, and was just perfect for the role.”

So, here she is, now we just have to wait till October to see her in action. 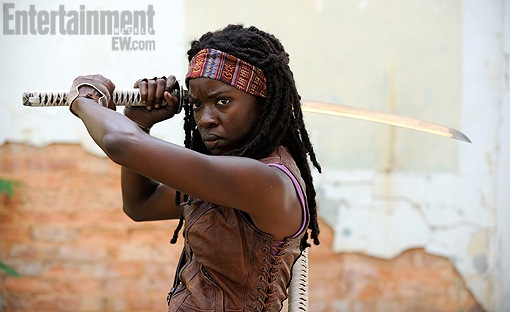