First Poster And Trailer For ”Chernobyl Diaries” – From Oren Peli

The creator of Paranormal Activity is back, but this time there’s no ghosts, just some evil Russian Mutants.

Oren Peli has made a fast name for himself over the last couple of years. His Paranormal Activity films have been major hits at the worldwide box office and his ABC TV show, ‘The River’ has garnered a lot of critical praise. Now he’s back on the big screen with another horror film that moves away from his typical found footage style and more towards traditional scare fest. Don’t worry, there’s still some of that hand-held shakiness that many of you love (kinda makes me queasy).

In this movie, we’re trading the small gauntlet of one home for the larger gauntlet of Russia’s Chernobyl. A group of idiot tourists have decided that it would be “Extreme” to go there for vacation. Well, guess what? Bad things happen when you go to an irradiated wasteland.

Official Synopsis:
“Chernobyl Diaries” is an original story from Oren Peli, who first terrified audiences with his groundbreaking thriller, “Paranormal Activity.” The film follows a group of six young tourists who, looking to go off the beaten path, hire an “extreme tour” guide. Ignoring warnings, he takes them into the city of Pripyat, the former home to the workers of the Chernobyl nuclear reactor, but a deserted town since the disaster more than 25 years ago. After a brief exploration of the abandoned city, however, the group soon finds themselves stranded, only to discover that they are not alone… 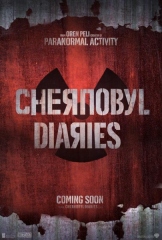