Check out the first poster for the Tim Burton stop motion film, Frankenweenie. Is it just me or does Frankenweenie look a lot like “Family Dog”?

The first poster for Tim Burton’s ‘Frankenweenie’ is out and… well, it looks like Family Dog. Look, I’m not complaining. I loved family dog. That was some seriously funny stuff and never really got the credit that it deserved. I’m just a little surprised that he looks… EXACTLY like Family Dog. Still, I’m curious… if not a little on the skeptical side. I generally fear films that take short stories and try to stuff enough extra material into them to create a full movie. I’ll probably still see it though. I’ve been a fan of most things Burton when it comes to Stop Motion animation. 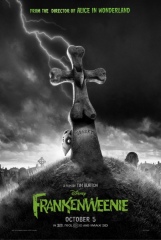 Official synopsis:
From creative genius Tim Burton (“Alice in Wonderland,” The Nightmare Before Christmas”) comes “Frankenweenie,” a heartwarming tale about a boy and his dog. After unexpectedly losing his beloved dog Sparky, young Victor harnesses the power of science to bring his best friend back to life—with just a few minor adjustments. He tries to hide his home-sewn creation, but when Sparky gets out, Victor’s fellow students, teachers and the entire town all learn that getting a new “leash on life” can be monstrous.

On the off chance that you don’t know what the hell I’m talking about when I mention Family Dog. It started as a segment on the old Steven Spielberg TV show, Amazing Stories. It was then turned into a very short lived, but funny TV series of its own.

While the idea was conceived by Burton, the actual appearance on Amazing Stories was written and directed by Brad Bird who also write and directed movies like Iron Giant, The Incredibles and Mission Impossible: Ghost Protocol. The segment was produced by Frank Marshal who also produced the Indiana Jones movies, Tiny Toons, Goonies, Poltergeist, the Back To the Future trilogy and several other iconic films.