“Kick-Ass” creator Mark Millar has announced that shooting for “Kick-Ass 2,” the sequel for the 2010 ultra violent comic book adaptation will begin this summer. 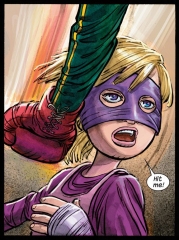 ”Kick-Ass” creator Mark Millar has announced that shooting for “Kick-Ass 2,” the sequel for the 2010 ultra violent comic book adaptation will begin this summer.

“We shoot Kick-Ass 2 and American Jesus this summer,” Millar says in an interview with Scotland’s Daily Report. “Then Matthew and I have Secret Service, which is a neddy James Bond.”

It’s unknown whether the key cast or director Matthew Vaughn will return for the sequel.

“My dad and I were living alone together after my mum died when I was 14 and that’s reflected in Kick-Ass,” Millar says. “I grew up wanting to be a superhero. You find a lot of these things turn out to be autobiographical.”

“It’s really odd. I watch the films and think, my God, that’s what happened to me. It is done subconsciously.”

“Even daft things, like at school there was somebody I fancied who really liked Dynasty. I started watching it so that I could chat to her about it. That is in Kick-Ass 2. I gave Kick-Ass’ parents the same names as my parents.”

One thought on “‘Kick-Ass 2’ Happening, Begins Shooting This Summer”