Welcome back to our second installment of This Week In Zombie News.

Welcome back to our second installment of This Week In Zombie News. We’ll kick off this week with an update of what’s been going on over at Zombies & Toys. The approaching end of June is going to bring us to the conclusion of The Undead Bazaar. The Undead Bazaar has been running since the beginning of May and has featured more than a dozen different zombie artisans and their crafts. Each artist also offered up some great items for us to give away throughout the bazaar and it’s not too late to enter many of the contests. Featured were zombie sculptures, jewelry, signs, dolls, keychains, and even a zombie coloring book. Make sure to stop by and enjoy the fun before it’s over.

In addition to The Undead Bazaar, Zombies & Toys is also still running its normal monthly contest. This month’s sponsor is T Shirt Bordello who is giving away a Zombies Eat Flesh shirt! Though the contest ends at month’s end, it will be replaced with another opportunity to win some great zombie merchandise. Actually, we have plenty of stuff to give away so be prepared for some additional give aways to pop up soon. Actually, we are sponsoring a contest over at Toy Break where you can win a sold out hand-painted resin zombie bust! Contest ends June 23 and all you need to do is post something
zombie related on the Toy Break forums to be entered. 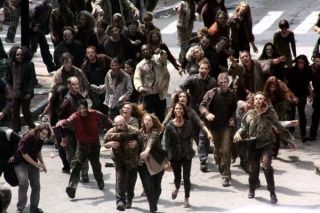 It has been another exciting week for zombie fans. Readers of YBMW are already aware of the latest production still featuring Andrew Lincoln as Rick Grimes. But Zombies & Toys featured a whole mess of photos showcasing some pics of The Walking Dead’s zombie hordes! One lucky Atlanta resident has a bedroom window that overlooks the area where some of the series is being shot. Lucky for us, news (and photos) travel fast on the internets. Finally, the role of young Carl Grimes has been cast. Chandler Riggs definitely looks the part, now lets just hope he can act.

In movie news, an international trailer for the upcoming zombie film The Horde was just released. I guess by “international” they mean “cool as hell”. The Horde will be available on Video On Demand in July. 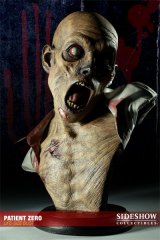 Now for some toy news being reported here, on YBMW, first! Sideshow Collectibles, who has brought us what I feel is the best line of zombie collectibles on the market, has another new entry. Their in-house line of zombies appropriately called “The Dead” have seen several incarnations. They are a line of 12″ figures, animated vinyl maquettes, a series of Legendary Scale busts, part of their 1/4 scale Premium Format line, and now have a 1:1 scale bust. That’s right, the Patient Zero life-sized bust is now available for pre-order through Sideshow’s site. For $489.99, you can own the collectible nightmares are made of. Featuring all of the exquisite detail you would expect from Sideshow.

Finally, for what may be the coolest zombie news since an electronic road signs was hacked to read “Caution Zombies Ahead”. Over the weekend, Newsweek’s website featured an Easter egg included by some old-school programmers. You see, by heading over to newsweek.com and entering the “Konami Code”, all of the headlines were changed to zombie news. Yes, that Konami code: Up, Up, Down, Down, Left, Right, Left, Right, B, A, enter. Unfortunately, the suits at Newsweek were not as entertained as they removed this feature as soon as they found out. 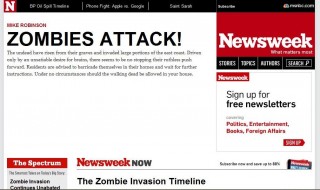 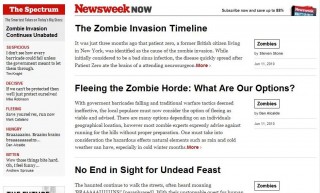 A Newsweek spokeswoman, Jan M. Angilella, said that programmers had hidden the “Easter egg” on the site to have “a bit of fun” and that “now that we’ve all had a laugh, we will be removing it.”

Thanks for stopping by for another week’s zombie news! You can get your fix during the week by visiting Zombies & Toys, checking us out on Facebook, and following us on Twitter. Until next week, remember to keep your head and aim for theirs! 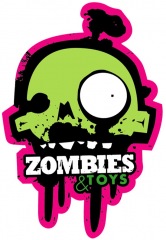