Check out the first full trailer for the upcoming ‘The Walking Dead’ video game. Also, listen to just what the game’s writer, Gary Whitta, has to say about it. 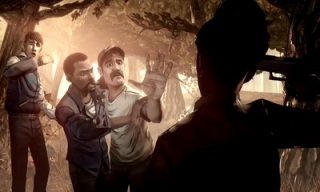 The first trailer for Tell Tale Games’ “The Walking Dead” video game was just released and… it didn’t really show that much. On the upside, the interview that followed did give us some big details on the game.

During the interview, here’s what the game’s writer, Garry Whitta, had to say:
1. The game will be based on the comic book, not the TV show.
2. It will be a far more liberal adaptation on the universe than the TV show.
3. Still in Atlanta.
4. No Rick Grimes.
5. New group of survivors is a disparate group of strangers… just like in the comic.
5. Glenn will make an appearance in the first episode.
6. Main character is Lee – A convicted murderer on the way to jail when the zombie apocalypse breaks out.
7. The game will be released in episodes that get increasingly more challenging, bleak and suspenseful like an actual TV or comic series.
8. The rating of the game will be a “Hard M”
9. The first episode is set for release in April.