Five eerie teaser posters originally shown at SDCC for Jonathan Liebsman’s “Battle: Los Angeles” have been released online. For those who missed out on Comic-Con, “Battle: Los Angeles” just about stole the show with its gritty “Blackhawks” down meets “District 9” cinematography. The film stars Aaron Eckhart and Michelle Rodriguez and won’t come out until March 11th, 2011.

Here’s the film’s official synopsis:
When unknown forces suddenly and mercilessly attack the City of Angels out of nowhere, it’s up to a local Marine staff sergeant (Aaron Eckhart) and a new platoon of unseasoned soldiers to meet the threat. As the invasion hits the streets of LA, these Marines become our first and last line of defense in an intense battle against an enemy unlike any they’ve ever encountered before.

Let us know what you think of these creepy posters and if you want more information, be sure to check out the film’s equally eerie viral site at reportthreats.org. 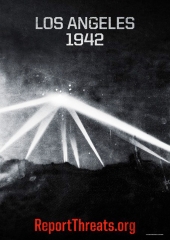