While in a remote part of Africa exploring a mineral cache in a mysterious cave, entrepreneur JOHN GREYSTOKE and his wife ALICE are killed in a tragic helicopter crash, leaving their three-year-old JOHN, JR. to fend for himself.

The first trailer is out for Constatin films’ mo-cap reboot of Edgar Rice Burroughs’ Tarzan. Interestingly, the film has a very dark and mature feel for a kid’s CGI flick. I’m going to say that I’m currently about 50% interested. The movie itself, looks interesting, but the preachy/overdone environmental/big company=satan storyline also doesn’t really impress me.

Starring in the film is Kellan Lutz, best known from Twighlight. He seems decent, though I’m curious to see how much of the mo-cap is actually him. Meanwhile, Spencer Locke as Jane might be one of the most poorly acted voice roles that I’ve heard in a long time.

Official Synopsis:
While in a remote part of Africa exploring a mineral cache in a mysterious cave, entrepreneur JOHN GREYSTOKE and his wife ALICE are killed in a tragic helicopter crash, leaving their three-year-old JOHN, JR. to fend for himself. Rescued by KALA, a gentle ape, the traumatized child is brought up by a band of mountain gorillas as one of their own, learning the ways of the wild as he grows into a strong and independent young man known as TARZAN. At 14, Tarzan first encounters another human: JANE PORTER, a pretty and intrepid teen visiting Africa with her naturalist father. His contact with a creature so like himself leaves him unsettled and yearning for more. The gorilla tribe’s longtime leader dies and is succeeded by a brutal silverback named TUBLAT, who settles an old score by driving Tarzan out of the group. As Tarzan wanders alone, he stumbles on the wreckage of the helicopter, where he unknowingly triggers a signal to his late father’s company. CLAYTON, a ruthlessly ambitious executive at Greystoke Industries, hires Jane and her father with a greedy scheme that will destroy the entire ecosystem. Jane, hoping to derail the plan, reconnects with Tarzan and becomes a target for both Clayton and Tublat. Facing deadly challenges from man and beast, Tarzan must use his jungle intuition and his human intellect to save his home and the woman he loves. A spectacular animated safari into a vibrant and exotic landscape, TARZAN 3D is a gorgeously rendered, action-packed journey through a magnificently imagined world. 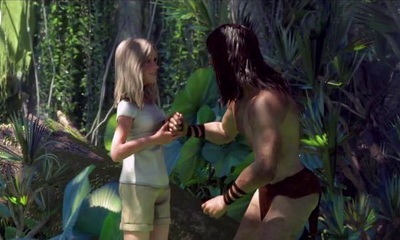