Gene Luan Yang has announced publicly on his website in a comic strip format that he will be boycotting M. Night’s “The Last Airbender.”

Writer/Artist/educator Gene Luan Yang, of the National Book Award-nominated graphic novel “American Born Chinese” has announced publicly on his website in comic strip format that he will be boycotting M. Night’s “The Last Airbender.”

You might be wonder what’s gotten Yang so bent out of shape? He explains in another post:

“To be clear, I don’t believe that director M. Night Shyamalan and the other creators of Paramount Pictures’ The Last Airbender movie are motivated by intentional racism. They probably just want to make the most entertaining (and profitable) summer blockbuster they can, the best way they know how. But intentionally or not, they are adding another chapter to Hollywood’s long, sordid history of Yellowface. By giving white actors roles that are so obviously Asian – and by stating from the get-go their preference for Caucasians – they tell Asian-Americans that who we are and how we look make us inherently inadequate for American audiences, even in a movie that celebrates our culture.” 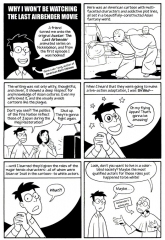 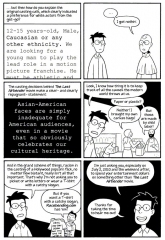