Get the details on the new series from Adventure Time’s Rebecca Sugar and watch the Pilot now before it premiers on November 4th!

Adventure Time is one of the most innovative and interesting TV shows on cable right now. What started as a weird and nonsensical collection of stand alone episodes has turned into a funny, heartwarming show with a continually unfolding narrative that is addictive. The show was created by Pendleton Ward, who has since gone on to create another great show, Bravest Warriors, which is exclusive to YouTube’s Cartoon Hangover channel.

Along with Ward, one of the big creative forces behind making Adventure Time the phenomenon that it is, is storyboard artist, writer, and composer, Rebecca Sugar. Her work on the show involved the creation of the super popular tunes like bad little boy, Bacon Pancakes, and Marceline’s Song and earned her emmy nominations for the episodes: “It Came From the Nightosphere” and “Simon & Marcy.”

The sad news is that Sugar left Adventure Time. The good news is the left to start her own show, Steven Universe on Cartoon Network that is slated to premier on November 4th.

Here’s the basic plot of the series according to Wikipedia:
Steven Universe is a coming-of-age story told from the perspective of Steven, a chubby and happy-go-lucky boy and the youngest member of an intergalactic team of warriors called the Crystal Gems. Together, the Crystal Gems fight and protect the Universe, while Steven strums up a cheesy tune on his ukulele.

I was trolling the net tonight, unable to fall asleep, and I found out that the pilot for the series is actually available to watch online. It looks great. It is a must watch for Adventure Time fans and will most likely start to draw in a whole new audience of its own. Now, check out the pilot below: 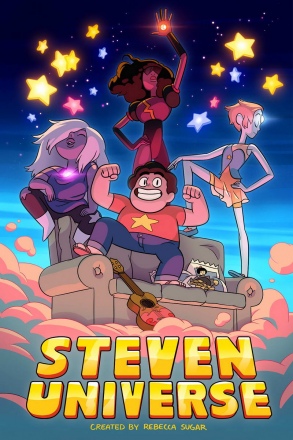