Watch as the OSU Marching Band performs music from Superman, Lord of the Rings, Harry Potter, Jurassic Park, and Pirates of the Caribbean.

The Ohio State University Marching band makes watching the game worthwhile, even if you don’t like football. They never fail to blow the minds of the audience with their intricate half time shows.

Yesterday’s show was called the Hollywood Blockbuster show and it was something to behold. After Starting off by turning the band into a flying Superman and performing a number from Lord of the Rings, the entire band formed into Harry Potter as a Quidditch player, followed by a T-Rex from Jurassic park that eats a member of the opposing team, and then closing with high seas battle between the two schools set to the theme from Pirates of the Caribbean. 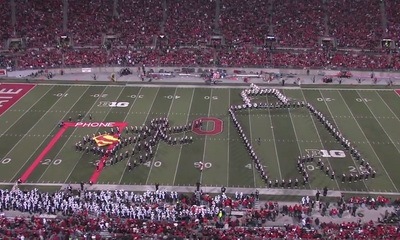