It looks like WB may have been doing a little bit of dirty dealing on the folks from Gilmore Girls. 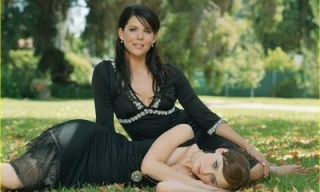 Hollywood Reporter is reporting that Gavin Polone, the executive producer of the hit show Gilmore Girls is suing WB for “ten’s of millions of dollars.”

The complaint accuses vertically integrated Time Warner companies WBTV and the WB of “self-dealing at all levels” and claims that they “have colluded to defraud the originator of hit ‘Gilmore Girls’ television series with a scheme that rivals the greed and bravado of any story line defendants could script.”

The suit refers to a 2000 agreement between Hofflund/Polone and WBTV and its 2002 amendment that guaranteed the producing company a percentage of the “modified adjusted gross,” the money the show earns after costs are deducted.

While Hofflund/Polone agrees that early in its run “Gilmore Girls” was in the red, the company disputes WBTV’s 2006 statement that through the first six seasons the series’ modified adjusted gross was still a $53 million deficit.

Third party auditors are estimating the number at closer to $45.5 million dollars.

I’m completely cool with saying.. as a man… this was a great freakin show. Ya, it was excessively girly at times, but it gave us good dialog, interesting stories, a cast where the mom was way hotter than the daughter, and it was the serving ground for one of the main Characters from Heroes.

The show also gave us Melissa McCarthy who was not only great in that show and in her new show, Samantha Who, but she was excellent in a small film called The Nines that she co-starred in along side Ryan Reynolds.