Set in the year 2183, Commander Shepard sets out to explore the Galaxy on a starship, the SSV Normandy, and basically saves the universe. 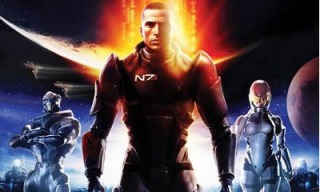 MTV had an exclusive interview with BioWare’s Casey Hudson, project director on “Mass Effect 2,” which hits retail shelves next week. While the interview focused on the game and its planned trilogy, Husdson was asked if there were any plans to bring BrioWare’s unique sci-fi universe to film or television.

“Obviously we have a tremendous amount of interest from people in Hollywood to make a major motion picture about ‘Mass Effect,'” he said. “The most important thing for us is, we don’t just want to see a movie get made. We want to see a great movie get made, if it’s going to get done at all,” says Hudson.

Adding that BioWare is keeping an open mind about the idea of “Mass Effect” getting the big screen treatment, but aren’t in any rush to make it happen anytime soon.

“We’re just looking at our options there, but waiting to make sure we have something really right before we do it.”

Mass Effect is a series about an evolved human race with space travel a part of life. Its set in the year 2183 and focuses on an elite human soldier named Commander Shepard, who sets out to explore the Galaxy on a starship, the SSV Normandy and basically saves the universe.

Chatter for the possible film adaptation to BioWare’s “Mass Effect” is still in very early-stage of rumorville. It’s still unknown if it will be adapted, but with the success of other FPS being rumored for big screen adaptation (Halo), it wouldn’t surprise us if “Mass Effect” makes the leap too.