Greed is Good Again as Wall Street 2 Gets Green Light 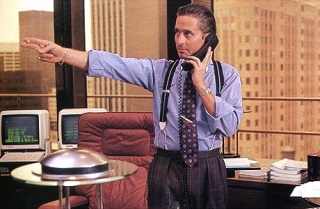 Watching the markets lately has been almost as dramatic as watching the 80’s blockbuster, ‘Wall Street’. The rise and fall of Charlie Sheen’s Bud Fox under the merciless hand of Michael Douglas’s Gordon Gekko defined the greed and ruthlessness of the financial world for a generation. If you listen closely in the darkened halls of the trading floor after the bell rings, you can still hear the voices chanting: “Greed is Good.”

Allan Loeb (“21”) has been tapped to write the screenplay, with Douglas being written in as an older Gekko though he’s not officially attached just yet. The story will focus on Gekko, just out of prison and dealing with a financial world that is much more volotile than he remembers. Sadly, Bud Fox, will not be playing a part in the sequel