Twilight Sequel Already on The Way

The soundtrack is already one of the top 5 best-selling albums on Amazon despite the fact that its not coming out for another month. 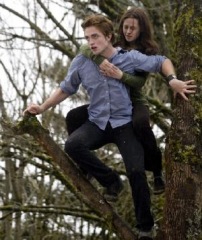 ’Twilight’ doesn’t hit theaters until late November, but the buzz is so strong that Summit Studios is already working on the sequel. One of the first signs that the movie will open strong is the fact that the soundtrack is already one of the top 5 best-selling albums on Amazon despite the fact that its not coming out for another month. Also, the exclusive calendar that is being put out by Borders has sold out of the first printing in just a couple days. Their new trailer was so hot that it got 3.5 million views in the first 48 hours since its release online. this is the craziest fans have been over a movie series since Harry Potter.

Accounts of people who saw the trailer along with the new film ‘Quarantine’ last weekend said the trailer elicited squeals of delight from the women int he audience and boos from the men. The word is that men won’t go see the movie because it isn’t gory enough. However, if they are smart, they’ll take their dates and sit through it so they can play vampire after the show.