Toei, who brought us the Power Rangers will release and debut a new Power Ranger parody in April that makes fun of … well, themselves.

Toei, who brought us the Super Sentai franchise AKA Power Rangers, will release and debut a new Power Ranger parody in April that makes fun of … well, themselves.

While most of these shows have been geared toward kids, the new show “Hikonin Sentai Akibaranger” (Unofficial Sentai Akihabara Rangers) will be a bit naughty and star “a team of three geeks from the most otaku-saturated corner of Tokyo who stumble upon an evil entity’s plans to destroy their neighborhood and must fight to protect it with the technology of a beautiful scientist.”

We’re unsure where Toei may be taking this, but from the sound of it, it’s pretty awesome and could potentially be a start of something new. Lastly, despite being a self-parody, like any good tokusatsu series, a toy line is already in the works.

As of now, “Hikonin Sentai Akibaranger” is set to debut only in Japan. But like anything now a days, we’re sure it’ll somehow find its way to American shore shortly after it airs in April. In the mean time, check out some images from the show below: 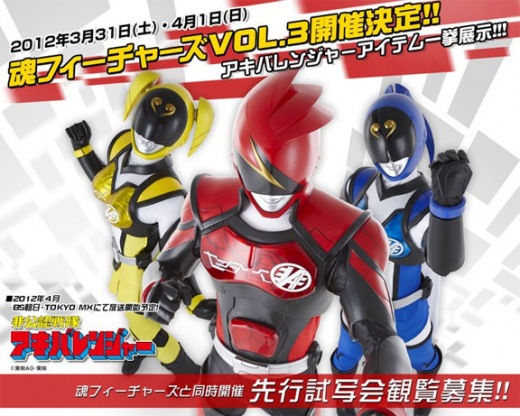