The rumor started when Duff’s husband, NHL hockey player Mike Comrie said in a recent interview that he saw a script marked Spider-Man lying on his coffee table. 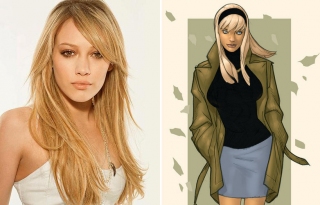 Currently a rumor has been flying around that former Disney star, Hilary Duff may be up for the role of Gwen Stacy in the Marc Webb directed “Spider-Man 3D” reboot.

The rumor started when Duff’s husband, NHL hockey player Mike Comrie said in a recent interview that he saw a script marked Spider-Man lying on his coffee table.

Here’s an excerpt from the article from Globe and Mail:

The kitchen contains evidence of their professional lives – his daily diet is posted on the fridge (from a bacon cheddar burrito for breakfast to five pigs-in-a-blanket as a nighttime snack) and a script marked “Spiderman” sits on the table, with lines for a character simply called “girl” highlighted in yellow (rumours swirl about who Spidey’s love interest will be in the series’ next instalment.)’

This is certainly an interesting development as no plot or story detail has been revealed for the new Spider-Man reboot. In fact, no one’s even sure whether Peter Parker (Andrew Garfield) will have Mary Jane or Gwen Stacy as his love interest. If Sony really wants to stay young with Spidey, chances are we’ll see a love triangle between Parker, Stacy and MJ (how it was meant to be anyway).

I’m not sure how I’d feel with Duff being Stacy. Because while she has the look, she will just scream Hilary Duff to me.