“I’ve tried on portions of the catsuit… I’ve seen conceptual drawings of what they want it to be. It’s fascinating to me.”

In an interview with Zap2It, “How I Met Your Mother” star Cobie Smulders comments on her skin-tight catsuit that her character Maria Hill wears in the much anticipated Joss Whedon directed “The Avengers.”

Here’s what Smulders had to say about the suit and the design process:

“We start in April, which is like… tomarrow,” Smulders says. “I literally leave here and I go to Albuqerque, New Mexico, to shoot some scenes in a catsuit. I’ve tried on portions of the catsuit,” says Smulders, “[and] I’ve seen conceptual drawings of what they want it to be. It’s fascinating to me. I feel like wardrobe becomes very creative on these types of movies because they literally spend weeks designing just the pants or the emblem. It’s such an all-consuming process, so I’m excited to see how it all turns out” 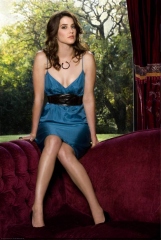