This fall, Universal Orlando Resort is unleashing hell by bringing to life LIONSGATE’s hit horror film, “The Cabin in the Woods,” at its award-winning, terrifyingly immersive Halloween Horror Nights event. 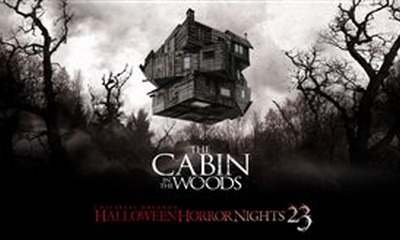 ORLANDO, Fla. (June 27, 2013) – You and your friends thought this would be a relaxing weekend away at an isolated cabin. But you’re being watched. And manipulated. They are pulling strings to orchestrate a bloody sacrifice that dates back to the beginning of time.

This fall, Universal Orlando Resort is unleashing hell by bringing to life LIONSGATE’s hit horror film, “The Cabin in the Woods,” at its award-winning, terrifyingly immersive Halloween Horror Nights event. Universal’s Entertainment team is partnering with LIONSGATE and film director and co-writer Drew Goddard to deliver a movie-quality haunted house experience that’s authentic to the film and places guests in the middle of an ancient fight for survival.

Additional details about this year’s event will be revealed soon, including more all-new, horrifying haunted houses.

Running select nights from Sept. 20 to Nov. 2, Universal Orlando’s Halloween Horror Nights has a more than 20-year history of creating an incredibly entertaining, horrifying Halloween experience that is consistently rated the nation’s best. The event features highly-themed, disturbingly-real haunted houses that are based on everything from hit films like “The Cabin in the Woods” to worst nightmares — and streets filled with hundreds of specially-trained “scareactors.” Tickets and vacation packages are on sale now and can be purchased at Halloweenhorrornights.com/orlando.

Available on Blu-ray, DVD and digital download, “The Cabin In The Woods” was directed and co-written by famed filmmaker Drew Goddard and co-written and produced by sci-fi and horror icon Joss Whedon. The film follows five friends on a college getaway to a remote cabin, and their fate is sealed the moment they walk through the door. They are pawns in a ritual sacrifice that demands blood.

“This is a twisted dream come true for me,” said Goddard. “The Universal team has done an amazing job making all the terrifying aspects of ‘Cabin’ come to life, and horror fans will not be disappointed. Also, they said they’d let me dress up like a merman and scare people, so I’ll see you guys there.”

At Halloween Horror Nights 23, guests will step inside the menacing cabin from the movie and fend off a malicious family of zombies. Just like in the film, guests will flee from the cabin and enter a hidden facility where a secret operative is plotting their sacrificial demise. Suddenly, a menagerie of bloodthirsty monsters is released – and they’re in the middle of all-out chaos.

“‘The Cabin in the Woods’ took the horror film genre and turned it on its head, and it’s a perfect fit for Universal Orlando’s Halloween Horror Nights,” said Michael Aiello of Universal Orlando’s Entertainment Team. “We’re collaborating with LIONSGATE and Drew Goddard to bring the iconic monsters from the film to our event. Guests will be assaulted by terrifying beasts taken right from the big screen – including the Hell Lord, the Dollfaces, the vicious Sugarplum Fairy, the Doctors and more.”