With House just a week away from its finale, Hugh Laurie can now turn back to his first love… Stephen Fry. 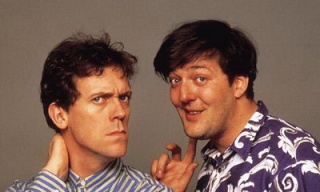 With House just a week away from its finale, Hugh Laurie can now turn back to his first love… Stephen Fry.

According to Fry (Via Twitter) He’s just announced that he’s planning on “cooking up a project together.” There isn’t any more info than that, but that is more than enough to get fans of the classic duo together.

The two first worked together when they were students at Footlights in The UK (Sort of like Britain’s version of Second City or The Groundlings). It wan’t long before the two ended up together on Blackadder and eventually on their own show, “A Bit Of Fry And Laurie” which ran from 1989 – 1995.

Just in case you didn’t feel like getting anything accomplished today, here’s a great 90 minute TV special from 2010 where Fry and Laurie reunited on TV for the first time in 15 years.