The stories of Harry Potter live on in Pottermore, but fans have gone one better and are creating spectacular looking online film projects that are sure to grab the attention of Muggles everywhere.

The written stories of Harry Potter live on in the world of Pottermore, but fans of the series have gone one better and are creating some spectacular looking online film projects that are sure to grab the attention of Muggles everywhere.

First up is the upcoming web series, Auror’s Tale:

Official Description:
New York City is a battlefield. Dark magic rules the underworld. The NYC Department of Magical Law Enforcement (DMLE) is the only line of defense. Hawthorne is the force’s newest recruit and the dark criminals’ latest threat. Plunging into the nightmare that his occupation offers, he makes quick enemies of the most depraved wizard gang in America: the ever violent, ever twisted Hellhounds. AUROR’S TALE chronicles Hawthorne’s tempestuous adventures. 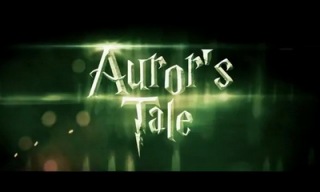 Director Leo Kei Angelos teams up with screenwriter Cassandra Johnstone in this ground-breaking digital debut. The two die-hard Potter fans together will bring the underground wizarding world of New York City to life. A longtime dream of Angelos’, he and his talented team now have the opportunity to express their love for the Harry Potter series through the art of film.

And this summer, it begins.

AUROR’S TALE is a Leo Kei Angelos film, co-written for the web by Angelos and Cassandra Johnstone. It is produced by Angelos’ production studio Red Phoenix Pictures as well as Angelo Lopez, Christopher Lopez and Jonathon Rosenthal.

If you are looking for one big story instead of a series, then upcoming fan-film, The Battle Of Hogwarts might be what you seek:

There isn’t a ton of information on this project. We know that it was filmed mostly in the UK and that it focuses on… wait for it… a battle… for Hogwarts!