Ian Somerhalder To Star in ‘Cradlewood’

They are calling it an American Style Pan’s Labyrinth. I loved that movie… which probably means this will suck.

For millions of people, Ian Somerhalder, will always be known for his work on “Lost” as “that dude who wanted to sleep with his sister and died in the first season.” That is unless you are a hormonally charged teenage girl. Then you are probably drooling over him in “The Vampire Diaries.” Well, according to THR, he’s just signed on to star in a new romantic gothic fairy tale called “Cradlewood.”

The movie centers on an Australian woman living in Boston with the heir (Somerhalder) to an incredible fortune whose family history is swirled in a legend that tells of a pact made with a demon which ensures that whenever a boy is born into the family, the father is killed. The heir suspects his girlfriend is pregnant, and after strange events occur, he comes to believe he will die if he continues to fall in love.

They are calling it an American style “Pan’s Labyrinth.” I loved that movie… which probably means this will suck. 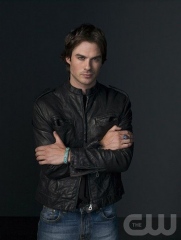