The good Doctor is set to return beginning next January in an ongoing series by writer Tony Lee and Artist Andrew Currie. 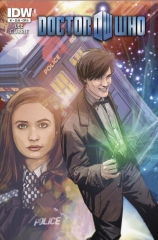 Via Twitter, IDW Publishing announced the return of their beloved “Doctor Who” comic book franchise. The good Doctor is set to return to the pages of the comic medium beginning next January in an ongoing series by writer Tony Lee and Artist Andrew Currie (with covers by Tommy Lee Edwards). The new stories will depict the adventures of the Eleventh Doctor (Matt Smith) and his new companion on a monthly basis.

According to ComicsAlliance, “IDW’s new ongoing comic book series promises not to dial down the excitement, offering holographic spam fighting Mad Max-esque mercenaries, Victorian Jack The Ripper suspense, penalty shoot-outs against Vikings and Cybernetic Space Pirate Dinosaurs among the many adventures that the Eleventh Doctor will be having.”

While IDW’s Doctor Who editor Dention J. Tipton says, “There’s going to be something for everyone in this story. For example, fans of the classic series should be on the look out for a classic DOCTOR WHO villain!”