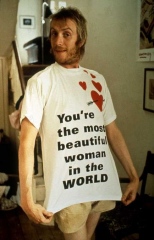 Sony Pictures Entertainment just released a statement announcing that actor Rhys Ifans has been offered the principal villain role in the upcoming “Spider-Man 3D” reboot. The studio won’t say which villain he’ll be, but will costar next to Andrew Garfield (Spider-Man) and Emma Stone (Gwen Stacy).

CULVER CITY, Calif., October 11, 2010 – Rhys Ifans will play the villain, opposite Andrew Garfield as Peter Parker and Emma Stone as Gwen Stacy, in the next installment of Spider-Man from Columbia Pictures and Marvel Studios, it was announced today by Amy Pascal, co-chairman of Sony Pictures Entertainment and Matt Tolmach, president of Columbia Pictures. The film, to be directed by Marc Webb from a screenplay by James Vanderbilt and produced by Avi Arad and Laura Ziskin, will begin production in December and will be released in theaters nationwide in 3D on July 3, 2012.

Commenting on the announcement, Tolmach said, “We have been very fortunate to attract some of the best actors working today to play the villains in the Spider-Man movies, and it is exciting to see that trend continue with Rhys Ifans. After seeing his performance in our upcoming film Anonymous, we’re in awe of his talent and think he’s the perfect choice to take on this role.”

The filmmakers prefer to not reveal which character Ifans will be playing in the forthcoming film.

Webb added, “What sets the Spider-Man villains apart is the complexity of their relationships with Peter Parker. Rhys’ incredible ability to embody both warmth and rage makes him the ideal choice for this character.”

Spider-Man is being overseen at the studio by Tolmach and Rachel O’Connor. Ifans is represented by United Talent Agency, Brillstein Entertainment Partners, and Independent Talent Group.

RHYS IFANS’ breakout performance came in 1999 in Roger Michell’s Notting Hill, opposite Julia Roberts and Hugh Grant, for which he received a BAFTA Film Award nomination for Best Performance by an Actor in a Supporting Role. Prior to that, Ifans starred in Heart, Twin Town, August, and Dancing at Lughnasa, and since then, he has appeared in more than 20 films, including Vanity Fair; Rancid Aluminium, Little Nicky; The Replacements; Hannibal Rising, Enduring Love; Human Nature; Formula 51; Hotel; The Shipping News; Once Upon A Time in the Midlands, Elizabeth: The Golden Age, Pirate Radio; Greenberg; and Nanny McPhee and the Big Bang. He will next appear in Mr. Nice, Harry Potter and the Deathly Hallows, Passion Play, and Columbia Pictures’ Anonymous, for director Roland Emmerich.

On television, he played the role of Peter Cook in Terry Johnson’s “Not Only But Always,” for which he won the BAFTA TV Award for Best Actor. He also appeared in “A Number.” In the theatre, Ifans has appeared in “Accidental Death of an Anarchist,” “Bad Finger,” “Volpone,” “Under Milk Wood,” “Beautiful Thing,” “Thyesters,” and, most recently, Patrick Marber’s adaptation of “Don Juan in Soho” at the Donmar Warehouse.