This is NOT a spoiler for the finale. The announcement of Riri Williams in no way spoils the end of Civil War 2. Bendis says so, himself.

The world of super heroes has always lacked for strong female and minority based characters. While Superman and Batman were kicking bad guy butt since before World War 2, most comic fans would be hard pressed to name any major black character from before the mid-seventies. The social climate had begun to change and the door was open for writers and artists to start looking more to the world around them as a source for inspiration. The result of that first big wave gave us characters like Black Panther, The X-Men’s Storm, and DC’s Cyborg. We moved past an era where Wonder Woman and, Jean Grey, and Sue Storm were the biggest female faces in comics and both the DC and Marvel universes are the better for it.

The great thing about comic book readers is that they are generally pretty intelligent. For the most part, we know when something is for marketing and when something actually serves the story. It might take us a couple issues to figure it out, but readers will come around to a story that’s worth reading. This has led to some pretty amazing characters like Miles Morales, Jessica Jones, Kamala Khan, and the new female Thor. Now, amidst Civil War II, one of the biggest events in Marvel Comic’s recent history, fans are being introduced to a new character by Brian Michael Bendis. Her name is Riri Williams, and she is Iron Man. 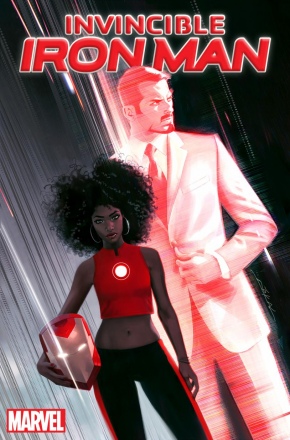 Riri is a science prodidgy who, after enrolling in MIT at 15 years of age, is noticed by Tony Stark when she builds her own Iron Man suit in her dorm. According to Bendis, who created the character (along with Miles Morales, Jessica Jones, and Maria Hill among many others) explained her origins and the evolution of an idea that became her character to Time.com

“One of the things that stuck with me when I was working in Chicago a couple of years ago on a TV show that didn’t end up airing was the amount of chaos and violence. And this story of this brilliant, young woman whose life was marred by tragedy that could have easily ended her life—just random street violence—and went off to college was very inspiring to me. I thought that was the most modern version of a superhero or superheroine story I had ever heard. And I sat with it for awhile until I had the right character and the right place.

As we’ve been slowly and hopefully very organically adding all these new characters to the Marvel Universe, it just seemed that sort of violence inspiring a young hero to rise up and act, and using her science acumen, her natural born abilities that are still raw but so ahead of where even Tony Stark was at that age, was very exciting to me.”

We wanted to see how the people who actually make their living selling comics to fans felt about about the news, so we checked in with Marc Hammond, Co-Founder/Owner of Aw Yeah Comics, with shops in Harrison NY, Skokie Il, and Muncie In.

“As I understand it, they intend to make her the replacement for Tony Stark as Iron Man, following the death of (spoilers) Jon Rhodes. (War Machine),” Says Hammond. “It is interesting to see a bit of backlash here and there when they change characters like this, then a few months later everyone is cool with the new status quo.

Others argue that diversification for it’s own sake is wrong. My take is this, Marvel’s heroes have always been appealing because they were us. Their problems and faults were much the same as ours. Now, more and more, the Marvel Universe is starting to reflect “us” visually, too. The world is made up of people of a wondrous variety. It opens up story paths and brings more new readers in who can now actually see themselves in a new hero. Bravo, Marvel.”

Personally, I’m both excited and saddened by the news. I think Tony Stark is generally a mess. Right now, he’s a bigger mess than ever. He’s dealing with a personal loss, a business loss, and he’s learning about his real parents. If anything is going to send him back to the bottle, it’s that. I think back to Batman Beyond, a great animated series that saw the young Terry McGuinness taking over the mantle of Batman under the mentorship of an older and wiser Bruce Wayne. I think Tony Stark has reached a place in his story where something like that would suit him. If there’s any sadness in this story for me, it’s that it’s a story. If it’s newsworthy, it should be newsworthy because it could signal a new era for the direction of one of Marvel’s biggest titles. Unfortunately, most of the national headlines seem to focus on the fact that the new Iron man is a black woman. Who cares, as long as she makes for good reading?