Is This the First Pic of Christian Bale From ‘Batman The Dark Knight Rises’?

Is this the first pic of Bruce Wayne after getting his butt kicked by Bane? Or is it just a hold over photo from Terminator Salvation… you decide.

There is a lot of speculation floating around about this image. A lot of people are saying that this is a photo from a make-up test to see what Bruce Wayne would look like after going toe to toe with Tom Hardy’s Bane. Other people are saying that it is actually not even from Batman The Dark Knight Rises at all, but from The 13 Women of Nanjing, another film that Bale is working on.

Finally, there is a crowd of people who are saying it is just an old shot from the set of Terminator Salvation. We have no idea, but it is still a pretty great photo. 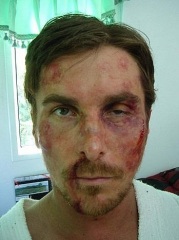