As realistic as some of Cameron’s 3D effects were, he now believes that… there ain’t nothing like the real thing baby. That’s right, he wants to take some of his filming to the deepest reaches of the ocean floor.

I’m going to start out by saying something a lot of people aren’t going to like to hear. I didn’t really care for Avatar. Shocking, right? Let’s face it, the storyline was nothing more than the product of drunken one night stand between Dances with Wolves and Ferngully and while the special effects were impressive… well, to me it seems like there were a lot of times that the movie was written to accommodate the effects instead of the effects being there to punctuate the story. I also didn’t really care for Titanic… but that’s a whole other story.

That brings us to today and Cameron’s plan to kick ever last penny out of the Avatar horse before it is well and truly dead. As we’ve talked about before, he is planning at least a couple more Avatar movies (When he should be getting off his duff and making us Battle Angel like he promised years ago!)

The second Avatar film will take place in the oceans of Pandora. Does that mean that the blue catlike Navii can swim? Will they even be in the movie? Or will this movie jump the Navii ship altogether and have the evil earthlings doing a little “Incredible Mr Limpett” action? 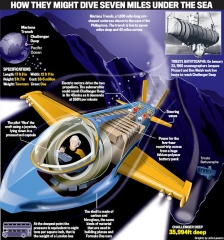 As realistic as some of Cameron’s 3D effects were, he now believes that… there ain’t nothing like the real thing baby. That’s right, he wants to take some of his filming to the deepest reaches of the ocean floor.

This won’t be his first venture into the deep. He has already done some great IMAX films that focus on deep sea life, but now he wants to get a little deeper… around 7 miles to be exact.

The last time this was done by humans was in 1960 and no one has attempted it since. According to the UK Daily Mail

Last weekend it was reported that he has commissioned a bespoke submarine, built of high-tech, man-made composite materials and powered by electric motors, which will be capable of surviving the tremendous pressures at a depth of seven miles, from which he will shoot 3D footage that may be incorporated in Avatar’s sequel.

Sure, I’m very curious about what its like down there, and I’d be surprised if he doesn’t use the film for some great documentary action… It just seems like using it as filler in a forced sequel of a relatively unimpressive story seems like kind of a waste.