Get your DVRs ready geeky parents! Acclaimed graph novelist Neil Gaiman (Sandman) is set to make an animated Halloween guest appearance as himself on the children’s animated PBS series, “Authur.”

From the press release:
This season, we’re hoping to empower our young viewers to go after their goals and dreams. Whether that means becoming a wheelchair basketball champion, or expressing yourself through writing, drawing, and making movies, Arthur and his friends show kids that determination and hard work really pay off,” said Executive Producer Jacqui Deegan. “Both Lydia and Neil serve as great role models, and we’re excited to have them to reinforce these important lessons for our audiences.” The new season premieres Oct. 11.

Gaiman will make his appearance in the episode called “Falafelosophy,” where he inspires one of the kids who’s trying to write and illustrate her own graphic novel. It is paired with “Tales of the Grotesquely Grim Bunny,” which will center around the changes on the shelves at the local comic store.

This may be one of the geekiest kid’s crossover if not the most surreal cameo ever. 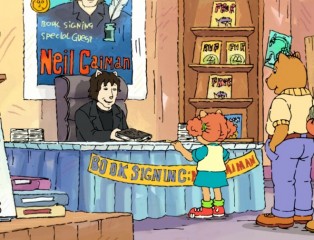