If you think about it, it is kind of funny that Michael Jackson had a better idea on how to portray Jar Jar than George Lucas did.

Michael Jackson is no stranger to hi budget special effects projects. After all, he was in the Thriller music Video, Captain EO, and The Wiz! Now, a new story is breaking that Michael Jackson was actually almost cast as Jar Jar Binks in the the Star Wars prequel films. Here’s what Ahmed Best, the voice of Binks had to say about it: 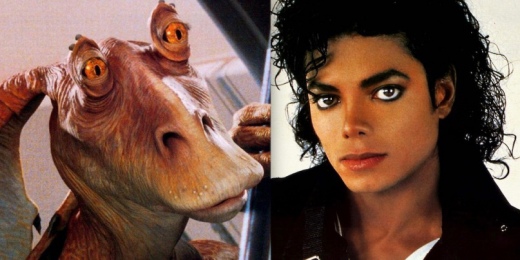 “Me, Natalie Portman, and George’s kids – we were at Wembley arena at Michael Jackson’s concert. We were taken backstage and we met Michael. There was Michael and Lisa Marie [Presley]. George introduced me as ‘Jar Jar’ and I was like, ‘That’s kind of weird’. Michael was like, ‘Oh. OK.’ I thought, ‘What is going on?'”

He continued: “After Michael had driven off, we all go back up to a big afterparty. I’m having a drink with George and I said, ‘Why did you introduce me as Jar Jar?’ He said, ‘Well, Michael wanted to do the part but he wanted to do it in prosthetics and makeup like ‘Thriller’.’ George wanted to do it in CGI. My guess is ultimately Michael Jackson would have been bigger than the movie, and I don’t think he wanted that”.

If you think about it, it is kind of funny that Michael Jackson had a better idea on how to portray Jar Jar than George Lucas did.